A350 XWB: the wings will be shipped to assembly line in Toulouse next week

Airbus CEO Fabrice Bregier said in a Bloomberg TV interview, when talking about the A350 XWB status that "the wings will be shipped to assembly line in Toulouse next week". (min. 3:40 in the video) 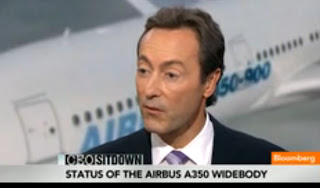 He has also explained the reasons of the EADS and BAE Systems merger failed, and about the next years´ Airbus restructuring where each factory will work as almost a separate business unit.

When talkig about A350 XWB, Mr. Bregier has said the 3rd aircraft is being manufactured and has explained the reason of the delay announced last July due to wing automatic drilling issues; "this is done, this is past, this is achieved".

Next week in the A350 XWB FAL official opening ceremony, we will see the Static Specimen assembled (fuselage, wings and dummie empennage) and for the MSN001, the complete fuselage joint, close to the wings arrived from Bremen in two Beluga transport aircrafts, and the Vertical Tail Plane painted in Airbus colours ready to be installed in the fuselage, as well as the Horizontal Stabilizer.