A350 XWB tires include safety- lessons learnt from Concorde accident and weight optimization.

Michelin will equip the A350 XWB with the 'Michelin Air X NZG' (Near Zero Growth). 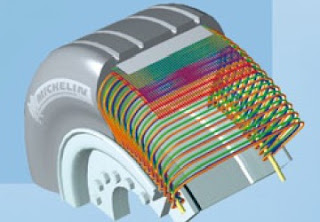 Safety lesson learnt: The NZG tires were developed in 2001 by Michelin for Concorde following the accident on 25/July/2000 and are designed to be near enough indestructible. Although the Concorde flights were not re-launched, the same NZG tires are fitted to the A380 and will be to the A350 XWB. The old design of Concorde tires -from Goodyear- had played a part in the accident chain, when a piece of metal ruptured a tire, throwing a 4 kg chunk against the underside of the integral wing fuel tank causing it to fail. The new tire's design make it near enough impossible to burst, but if it did burst the debris would be so small that they would pose no threat to the wing structure and fuel tanks directly above.
Weight optimization: tires manufactured using NZG are said to weigh around 20% less than those produced with conventional technology. The Air X NZG tires help make the A350 XWB more fuel efficient, reducing its environmental impact and exhibiting superior robustness in operation.

The tires were developed at the Michelin Technology Center in Ladoux (France), and are manufactured at the plant in Bourges (France), which is Michelin’s worldwide center of excellence in radial aircraft tires.
Michelin Near Zero Growth (NZG) technology:  increases tire longevity through the use of an ultra- high tensile composite cord made of nylon and aramid fibers. The cord reduces casing growth (due to the effects of inflation and centrifugal force at takeoff) to less than 3%, compared with 8% for a nylon radial and 12% for a standard cross-ply tire. As a result, the tire structure is subject to much less stress and is thus much more resistant to Foreign object Damage. Enhanced wear-resistance increases tread life, meaning that tires can make more landings before they need to be changed. 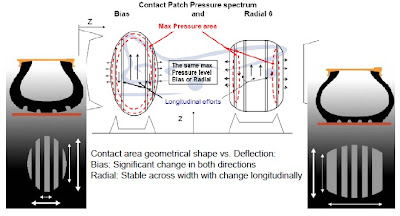 Bias vs. Radial Tire contact pressure distribution
Reliability: the Air X NZG tire can lower the rate of foreign object damage by up to 50%. By reducing the number of unscheduled maintenance acts and thus aircraft downtime, Michelin is helping airlines to optimize their operations.
Economic: the Air X NZG tire lowers maintenance costs by increasing the number of landings by up to 100% and reducing the number of wheel changes by up to 50%. The right tire also generates fuel savings.
Environmentally friendly:  the new Air X NZG tire meets Michelin’s environmental performance standards throughout its entire life, from manufacture to end-of-life recycling. On average, an NZG radial tire requires 22% less raw material than an equivalent cross-ply tire.
Air X NZG tires are usually filled with Nitrogen rather than air, because it's more stable throughout the massive temperature range that the tires can be subjected to. A350 XWB, as A380 have an on-board tire pressure monitoring system. Excess pressure is bled off automatically and low pressure warnings are displayed in the cockpit.
Michelin has been an Airbus supplier since 1983. They equip all Airbus civil aircraft.
Posted by Blogjfa at 8:05 AM