Airbus is trying to reassure suppliers and customers that the A350 XWB remains on track for first flight in the summer of 2013—and on time for delivery in the second half of 2014. “Our message is: The program is on plan and the upcoming major milestones will be on plan, too,” Chief Operating Officer Guenther Butschek said.

During the FAL inauguration, the real stars were test airframes MSN5000 and MSN001. Their engines and other major components - including horizontal stabilizer, the tail cone and a vertical tail plane freshly painted in Airbus livery - were on display. 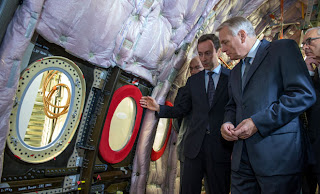 The static aircraft, which will be used solely for ground tests, has nearly completed assembly, with a full fuselage, two wings and the vertical tail plane joined. It is currently placed in one of the two Stations 40 that are dedicated to wing-body-joining work. The aircraft will be transferred to the static test hangar at the Toulouse Jean-Luc Lagardère site to be prepared for static tests to start in spring 2013 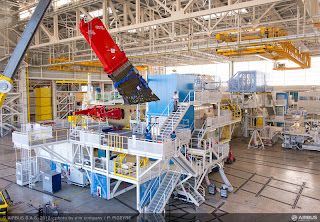 The fuselage of MSN001 is adjacent to it, at Station 50. One of the wings for MSN1 has arrived and is in the final assembly hangar next to the fuselage –already joined. The other is expected to arrive before Halloween. 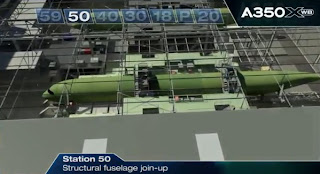 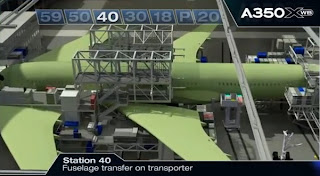 A350 XWB Program head Didier Evrard reminded the audience that the aircraft started "with a blank page that we gave to 10,000 engineers." "In turn they gave us a product that burns 25 per cent less fuel, offers up to 8,000 miles of range and provides extra light, extra space and extra comfort," he said. 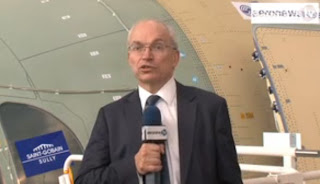 
Based on the article “November Wing-Joining Planned For A350 MSN1” published in Aviation Week
Posted by Blogjfa at 10:48 PM