The final assembly of the MSN001 aircraft, that is the first flying A350 XWB, is going to be started by mid October, when the centre fuselage arrives Toulouse from St.Nazaire and the aft fuselage leaves Hamburg. Final bracket installation is being performed in order to achive a high maturity when they arrive the FAL.

Already at Toulouse, the Nose and Front fuselage and the Horizontal Tail Plane are "waiting" the Vertical Stabilizer that will arrive in coming days as we can see in this photo of the transport from Stade (courtesy of Skyscrapercity forum). 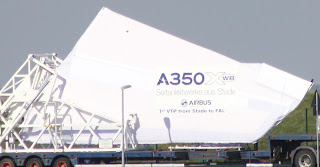 If the fuselage integration is completed during second half of October, the power on is targeted for just after Haloween.

After that, by mid November, the wings will be shipped to the FAL from Bremen, where they are being equipped with systems movables since the first week of September. The wing join-up for MSN001 should be completed by end of November taking advantage from the lessons learnt of the wing join-up already done for the Static Specimen.

A long way untill the first flight next year in Le Bourget Air Show in June.
Posted by Blogjfa at 10:24 PM